As we already know from our basic diving course, objects under water appear 1/3 larger and 1/4 closer to us if we put a layer of air in front of our eyes with the help of a diving mask. However, this is only an “apparent” change in size. A fish with a length of 1m always remains 1m long, it only appears to us to be about 1/3 larger due to the different densities of light and water. This also explains why a fish advertised by the fisherman as 1.20m tall actually measures only 90cm when it is taken out of the water. The size ratio in turn depends on the water quality or the temperature, the ingredients (e.g. calcareous) and therefore the current density of the water. This also explains the fact that sometimes underwater objects appear larger and closer than they normally are. If we were to dive without a diving mask, enormous farsightedness would occur immediately, due to which we would no longer be able to perceive contours and orientate ourselves.

The position of an object underwater is also “apparently” different from what it actually is. One way to understand this is to stand on the edge of a footbridge, fix your eyes on a stone on the ground and then crouch your body. The stone seems to move closer to the water surface with the changed perspective, although it does not change its position.

This effect can sometimes lead to brief confusion when diving, because some beginner divers do not turn their head to look to the side out of habit, but only roll their eyes, which can lead to a brief loss of orientation and mainly at greater depths or in moderate light conditions, this can lead to a moment of shock, as landmarks are briefly in a different place and the distance is misjudged by the brain. One briefly gets the impression one is moving away from the object. An effect that can also be experienced when diving with a full mask. How many times have we thought a fish was moving next to us and in the end it was just an object that seemed to move briefly due to the angle of view.

Not only do underwater objects appear larger and closer to us, they can also appear further away and smaller than they actually are. This is the phenomenon of visual reversal. This is not a physical law, but a phenomenon that can be balanced through experience. Humans are used to estimating distances based on contours (image sharpness) and the size of objects and surroundings. In road traffic, for example, we can roughly estimate how far away it is because we know how big a traffic sign is.

This is a bit more difficult under water, since we can no longer see the object sharply due to the diffusion and depending on the distance. What is seen becomes blurred and has almost no contours that we can use to correctly estimate the size and distance. This phenomenon is also known in road traffic. In rear-end collisions in fog. Due to the diffuse environment, contours and sizes and therefore the distance cannot be correctly estimated. This often leads to rear-end collisions because the braking distance is misjudged. Underwater objects sometimes appear further away than they usually are. From the figure it can be seen that a fish in murky water is perceived to be smaller than it actually is. Due to the lack of contours, the outline of the fish, to put it simply, disappears into the background and we only see the object within this diffuse border.

As we know, because of the refraction of light, underwater objects appear a third larger and a quarter closer to us. At greater distances, however, objects appear farther away. In terms of visual reversal, we’re now at the turning point. The reversal point is the point at which objects no longer appear larger and closer to us, but exactly the opposite, namely further away and smaller. The distance from the reversal point to the eye depends on the clarity or turbidity of the water. The cloudier the water, the closer the turning point.

Very murky water : Distance from objects 3 to 4 feet away is overestimated.

Moderately cloudy water: The turning point is between 20 and 25 feet.

Very clear water: Underestimates the distance of objects 50 to 78 feet away.

Interested divers can download the script on the topic “Seeing under water” here and read about the physical background. 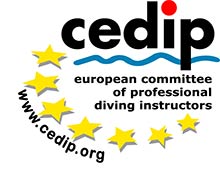